So you guys have an idea of what to look forward to . . .

Last weekend, we all left to different parts of the country to visit a volunteer that works in our respective projects. I had an amazing visit and my volunteer visit was probably the highlight of my Center-based training. Unfortunately, I have not finished writing that blog entry but next time I get a chance to write, I will include it.

Tomorrow (Aug 8) we are leaving Santa Lucia for Field-based training. All PAMers are going to Moroceli (about 2 hours away) and we will be there for almost 7 weeks living with a different host family and getting more language and tech training. I dont know what kind of internet access I will have there but I promise I will write as much as possible. Take care and I hope you are all doing well! Talk to you soon!
Posted by Courtney at 3:44 PM 8 comments:

I haven’t written much about what I have done on the weekends, so here I’m going to write a little bit about my favorite events so far. Besides hanging out with my host family and playing soccer with the locals and the Americans, I have gone on a couple of trips outside of town. A few weekends ago, a bunch of us went to La Tigra which is a very large protected cloud forest. There is a path that starts in Santa Lucia that leads to the forest, but the hike to the entrance alone is 4 or 5 hours. Instead, the best way to get to the forest is to take the bus to San Juancito and then walk to the entrance there.

So, there are some small buses in the city called “rapiditos” that you can go around in, but other than that all city bus transportation is on American yellow school buses. Some of them still even say “Bluebird” or “Union School District”. But some of them are actually painted with pretty cool graffiti-like designs and have stereo systems installed inside. Unlike school district laws in the US, it’s three people to a seat rather than two, you can stand on the bus, and there is no such thing as the line at the front near the driver that you can’t cross. As we were crammed inside the bus headed to San Juancito, I mentioned to another volunteer that I was surprised that they don’t get more buses for transportation because all the buses are packed full. Well, it turns out that the drivers like it like that and may even wait longer than they should at a stop to get a full bus. The more people they can squeeze in, the more profit from one trip!

Unfortunately, not all of us made it to the entrance of La Tigra. We were told that the hike from San Juancito to the entrance of the forest is only about an hour. However, after walking uphill for about an hour and a half, we still weren’t at the top. The first five people in our group were super power-walkers and so when we stopped to take photos and they continued on, there was no way we could catch them. Then, my friend, Becky, and I picked up the pace a little bit and got split up from the others who were walking at a slower pace. Finally, Becky and I decided to turn around when we thought we saw our group on a different trail below us. Part of the trail forked at one point and we just figured they had taken the other path and we had gone the wrong way. Since neither of us had a map, or really any idea where we were going, we decided it would be best to turn around and catch up with the others behind us. So, sadly, I never made it into La Tigra but it was still beautiful from what we could see and it was a nice change to get out of Santa Lucia for a little bit and see anothe part of the country. 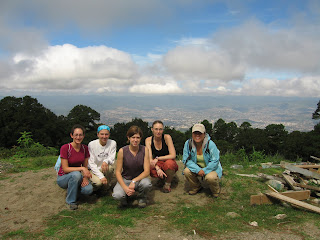 The top of Santa Lucia

Last weekend, a bunch of us decided to hike to the television and cell phone towers at the top of the mountains in Santa Lucia. The path to the towers is not clear, and so we asked for directions at about every turn. My host mom told me the hike is 2 hours or longer, but that’s at Honduran walking speed. Since we still walk like Americans, we were at the top in about an hour. We hiked from one tower to the next for about 5 hours on one of the hottest and clearest days we have seen in Santa Lucia. After we got back in town, I went and played a couple hours of soccer. So, if I wasn’t burnt after the hike, I definitely was after soccer. Also, the next day I was so uncomfortably sore that I would have given anything for a Jacuzzi. 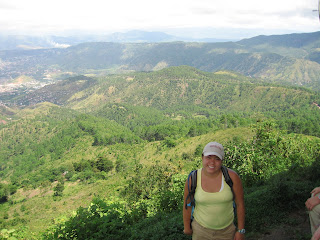 The view from the top of another hill 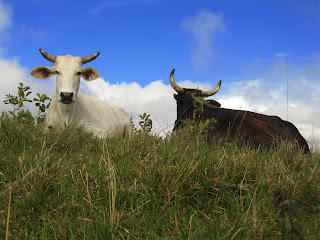 It’s also pretty common for us to go out to one of the five restaurants in Santa Lucia. However, we can’t go out everyday because a night out costs about 100 lempiras (only about 5 American dollars, but about two days worth of our living allowance.) Besides my sense of time, my sense of prices has also changed a lot. I bought a beautiful pair of handmade earrings for $1 and thought it was the best deal ever. However, I have to remember that Peace Corps only gives us $3 a day to live off. We get about 55 lempiras a day, and the exchange rate is about 19 lempiras per $1. Also, the price of imported goods compared to local products is pretty crazy. My favorite candy here is called Choco Max, chocolate covered peanuts which cost 2 lempiras a bag at the pulperia (store) right outside my house. However, a Snickers on its own is 20 lempiras. A small jar of Jif peanut butter can only be purchased in certain supermarkets in Tegucigalpa and costs about 60 or 70 lempiras, which could buy 12 mangoes or more depending on the market. Also, I was talking with my little host-nephew and I found out the price of my laptop when I bought it new costs about twice as much as the price of a car here!
Posted by Courtney at 3:22 PM 1 comment:

Well, after two weeks of TECH training, I now have a better idea of what being a PAM volunteer actually means. So, here is an idea of what I am going to be doing for the next two years of my life!

Us “PAMers” will be working to care for the Protected Areas of Honduras, which are basically equivalent to National Parks in the United States. No one is allowed to live or do anything in these Protected Areas (except hike). However, some of the areas that have been declared as protected include some small communities living on the outskirts. This area is called the buffer zone, the border of land 2 km or wider that surrounds the Protected Area “nucleus” (although technically it’s all Protected Area).

Since the government just can’t tell these people to pack up and move out, us volunteers go in to help people learn how to live more sustainably. Some projects we may be working on may be trash management, sanitation (of water and hygiene), and conservation. Also, many of the people who live here have crops or live on a farm. So we have been learning a lot about sustainable agricultural practices and income generation. (We actually got to go to a farm the other day but I will write about that later).

From making butterfly nets to A-frames, a lot of the skills we are learning during training have been very simple, fun,and very useful. Last week, we had a current volunteer come and teach us how to make colorful purses and bracelets out of churro (chip or snack) bags, which are found all over the streets. In this volunteer’s site, a woman has actually started selling a whole bunch of jewelry, bags, and wallets made out of the churro bags, generating her own income. Also, we learned how to make goggles and a mask out of pepsi bottles which we can teach to farmers who often use very dangerous pesticides and fungicides without any protection.

Now that I am getting more in-depth training, I have come to realize how perfect the PAM project is for me. I feel like my timing with my application to the Peace Corps and the start of the whole process and everything couldn’t have been more right on. I am becoming more fluent in Spanish as well as learning skills that will allow me to teach communities how they can help themselves to live more in harmony with their land and protect the natural beauty that surrounds them. I’m glad that I have been assigned to a project that I am very passionate about and I am sure that everything I have learned and will learn here will be skills for life. (Even learning how to use a machete! Which actually has been one of the highlights so far.)
Posted by Courtney at 5:07 PM 1 comment:

Hey everyone! Sorry that I have not been doing a very good job of keeping my blog updated. Has it really already been over two weeks since I last wrote?! I believe that because I am no longer thinking about how the days or months relate to events in the United States, my sense of time has completely changed. Lately, I have just been focusing on one day at a time, maybe a few days in advance depending on what kinds of activities we have coming up. Also, my weekdays are packed pretty full so there isnt much down time to stop and think about everything that has happened or how much time has passed. Anyways, to give you guys an idea of what Training has been like so far, here is an idea of my usual schedule:

One fun thing that happens at lunchtime is that most of the host families don’t send us with a lunch to the office but drop it off later on so it’s warm. The school is up on a hill and for those who get their lunch dropped off (like me), we all have to walk down to the entrance and find our Tupperware or lunch box with our name on it. I felt like a five year old every time I get my lunch, hurry back up the hill, and open it up to see what is inside. LOL.

When our day at the office is done, we usually head home, to the internet café, or to the campo to either play soccer or Ultimate. (Actually, we have only successfully played ultimate once. Hondurans love their soccer, so trying to get a game of Ultimate going is pretty tough).

Getting used to the Honduran lifestyle is definitely getting easier. In fact, I think I am immune to itchy bug bites now. No joke, I’ll get bit and resisting the urge to scratch them has gotten easier and easier to the point where now they heal faster because I leave them completely alone. Also, I am becoming closer and more comfortable with my host family (and even getting some free cooking lessons!). Although my body is still adjusting to the food, the climate, the language, the bugs, and everything else, I definitely have a lot of positive things to think about whenever I am feeling homesick.
Posted by Courtney at 5:02 PM 1 comment: