Always value the good things we are given

Mercedes Gomez is the head of the pottery directive that I have been working with here and even though I have just recently gotten to know her, we have quickly developed a strong friendship. Mercedes doesn’t leave her house very often . . . or at all . . . so I was surprised when I was riding into Gracias on the back of a pick-up and saw her standing next to a pick-up pulled over on the side of the road half way to town. She looked a little preoccupied, but I did not think much of it. Later on, I found out that her husband, Marcelo, had a stroke and when I saw her, she was going with him to the hospital in Gracias. A few days later, I was devastated to hear the news that he didn’t make it. Most of the time, life out here is so pleasant and relaxed that you forget that you are living in a country that knows hardship way too well. But once in a while you get hit by the brutal reminder that it’s a life of difficulty and suffering which no one should have to face. When Marcelo had the stroke, other villagers went around La Campa looking for someone with a car that could take him into Gracias. In Nueva Esperanza, there are only four or five families who own cars. In La Campa, there are a few more. In the hospital in Gracias, they did not have the proper equipment or doctors who could attend to Marcelo, and so they said he must be sent to Santa Rosa de Copan, the next largest town an hour away. I’m not sure if they had to find someone else with a car to take him or if they went on bus which takes an hour and a half. Marcelo was attended to in Santa Rosa for a few days but, again he needed better care, which he could only get in San Pedro Sula, three hours by direct bus from Santa Rosa. Marcelo passed away on the trip there.

Michael and I went to his wake and were happy to find that Mercedes was able to keep busy providing coffee and bread for all the guests who came to mourn her husband. The night was gloomy but life must go on.

But even in this small community, as loved ones leave us to move on to a better place, we are blessed with the arrival of new lives that will share in the same love that connects us with those from before. One week before Marcelo passed away, my good friend, Genara, had a baby girl in the last week of March. There were complications, however, as Abigail was born with a severe cleft lip. Luckily, Abigail is able to breastfeed and Operation Smile will be coming through in the end of August. So, hopefully they will be able to operate on their baby. 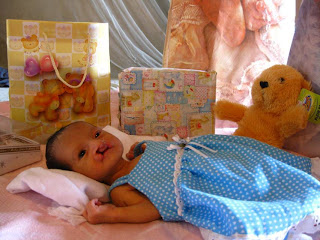 Genara's baby Abigail
Posted by Courtney at 8:13 AM No comments: