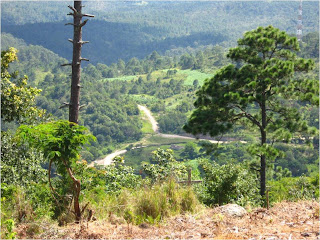 A view from Cero San Juanera 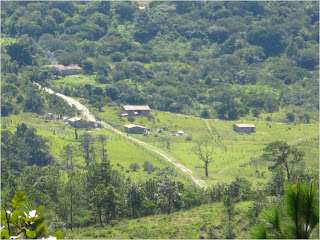 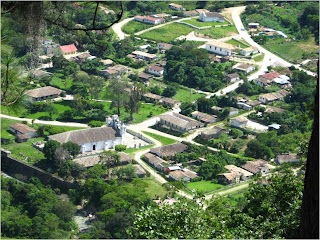 La Campa from above 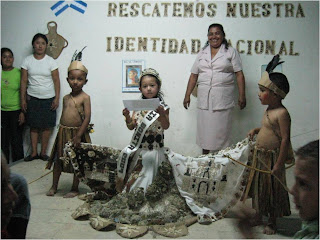 The winner of this year´s ¨India Bonita¨ (Pretty Indian) contest. 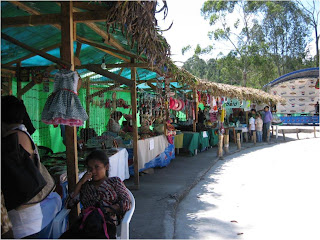 Every year there is a fair in Santa Rosa de Copan where there are music concerts, coffee tasting, and a celebration of the pride of the town . . . cigars! 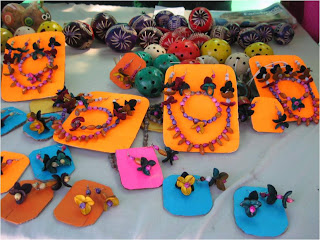 Some jewelry at the fair made out of seeds and flowers
Posted by Courtney at 11:12 AM No comments:

Getting Ready for Life in the Capital!

As you all know, my time with Peace Corps is winding down. And while the days are winding down, the amount of work certainly is not following the same pattern. In this last six months, I have had the most work I have had in my whole Peace Corps service! This can be attributed to the fact that people in the community are more willing to ask me for help or workshops. Initially, I imagine they were nervous to ask such things but now that I am closer with more individuals, there is less unwillingness to ask. Some have asked me to teach them to make cake, pickled vegetables, help them make a personal stove, help them calculate costs and gains of a pulperia . . .

Truthfully, it’s nice to have the distractions so I don’t have to think about how little time I have left here in Nueva Esperanza. At the same time though, I am being careful not to overdo it because I also want time to just relax and spend the last couple of weeks with people here.

Another distraction has been . . . where am I going to live in the next three weeks? A few months ago, I applied for an internship that USAID was offering to all Peace Corps Volunteers who have completed their service in Honduras. The internship will be in the USAID office in Tegucigalpa, the capital of Honduras. My friend and fellow PAMer, Mary, also got the internship and we decided to look for an apartment together. Although we do realize we are going from one spectrum to the other: living in small communities working on development to living in the capital in a posh office working on development . . .we are excited for the opportunity and know we will learn a lot more about international development from our experience with Peace Corps and with USAID.

Some of you may have heard that there has been some political strife here in Honduras and USAID said they would be cutting their aid. Mary and I did have some initial uncertainties if we still had our job, but we are in the process of signing the contracts so no worries!

Well, searching for apartments has been tough for a variety of reasons. One: I live about 7 hours (on a good “fast bus” day) from Tegucigalpa, Two: We don’t want to pay ridiculous prices for a place (we’ve lived in mud houses for two years, too nice of an apartment is unnecessary and would be a little overwhelming) and Three: Unlike in the villages where you can walk into someone’s house with no locks, it’s hard to get in contact with people renting when they have huge impermeable walls and barbed wire all around. Mary and I searched on three different occasions. The first time, we found some apartments we liked, but were very far from the USAID office. From this trip, we realized that we would really like to be within walking distance of the office. So the second time, we walked around two nice neighborhoods right above the office. We looked at some very nice apartments but none that were in our price range. Because Mary lives close to Tegucigalpa than me, she was able to check out one option that sounded promising. A woman was willing to close off part of her house and turn it into a two bedroom apartment. Because we were running out of time and because I really can’t afford to come into Tegucigalpa anymore, we checked this option out. It was perfect!
Posted by Courtney at 2:08 PM No comments:

Counting Down . . . But Making It Count

When I was getting ready to leave for Honduras on July 2007, two years seemed like such a long commitment. I know a few people who have told me they would like to do Peace Corps but wish the term was shorter. But now I have two weeks left and inevitably have had to start thinking about the end. Even if I didn’t want to think about the day I have to leave, I can’t help it. I dream about being back in the states or the move to Teguz. During my classes when my students are working on an in-class assignment, I have my notebook handy so I can scribble down reminders of things I need to do or items I want to give away before I leave.

Now with so little time left, I’m trying to make every day count. I don’t want today to be the last day that I see certain people. But I know that is the case for some who live far away or that I don’t see very often; and already some people are thanking me for the time I was here and hope that I travel safely.

To make my time here count, I have started to try to think more like a tourist, or how I was when I first arrived. What would I have wanted to do here if I were just visiting for a few days? One: Take lots of photos, so I have pulled my camera out again to the excitement of the children, and adults, and everyone really. Two: I’ve worked enough with the business side of the pottery but I never actually made anything. So I decided to try my luck at being an actual Lencan potter! Herminia and Nicolas started giving me pottery lessons. First, we made two bowls because I don’t have any good deep bowls to eat my cereal in every morning. Then, we made a pot or “olla”. Here´s some photos of the fun! 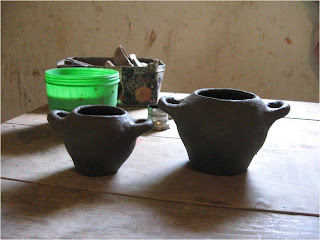 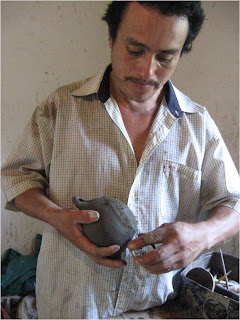 Nicolas helping me with my pottery 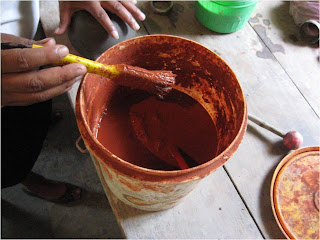 The red dirt they use to make the paint 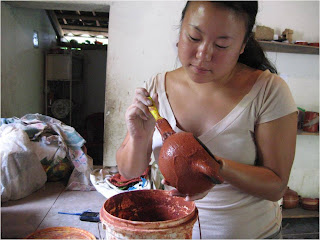 Me putting the first coat of paint on 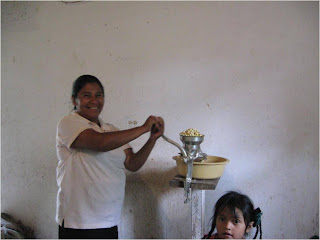 Herminia making lunch after our not-so-hard work
Posted by Courtney at 2:07 PM 1 comment: 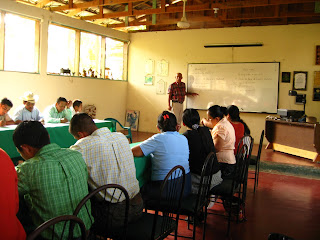 Back in June, I went to a Women and Agriculture Conference that the Protected Areas Management project puts on every year. How it works is each PCV that wants to participate brings a woman from his or her community to the conference. During the conference, we learn about improved agricultural practices such as making organic compost or saving seeds, but we also talk about gender, self-esteem, and female leadership. This year, I took a woman from La Campa named Adelaida Gomez who works for a privately funded institution called CASM (Comisión de Acción Social Mennonita). This institution does a lot of really great development work in La Campa and other municipalities and their funds have not been cut because of the coup that happened here in the end of June.

During this conference, we visited an integrated farm on the north coast which interested Adelaida a lot. So much, in fact, that she went back to La Campa and organized a trip back up there with a group of 30 farmers from here! An integrated farm uses improved farming practices such as organic fertilizers and takes into consideration one´s health and the health of the environment. For example, instead of burning their fields every year, they let a plot of land rest for a season or two instead of stripping it year after year of all of its nutrients.

So, Adelaida, the other staff from CASM, three high school students doing their three month practice, and the farmers picked me up on the side of the road outside of Santa Rosa de Copan the next day. I spent the night in Santa Rosa because the day before I had taken a friend and her baby to a cleft lip medical brigade put on by Operation Smile. (Unfortunately, the baby was underweight five pounds and so they didn´t operate.) Adelaida and I rode in the front to give directions to the driver. Luckily, we didn´t get TOO lost finding our way back out to the farm because it´s pretty well hidden from the main road! On the way, we ran into some people peacefully protesting the return of president, Mel Zelaya. Road blocks have been very since the coup but luckily this protest was only blocking one lane, slowing down traffic but not completely stopping it. I had only heard about the protests but this was the first time that I actually saw one in action. 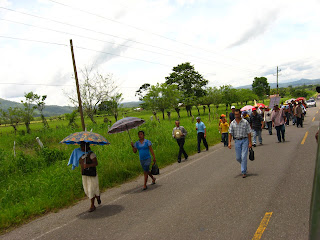 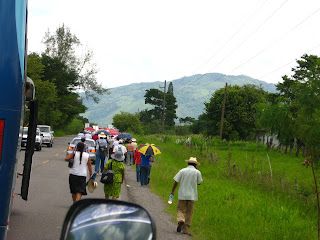 At the integrated farm called Naranjo Chino, we made insecticides and fungicides using natural ingredients like papaya leaves. We saw a compost latrine, a water filtration system using a barrel and some sand, a biodigestor, and an ecological oven among other things. 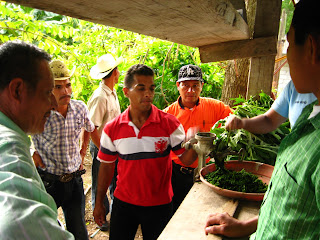 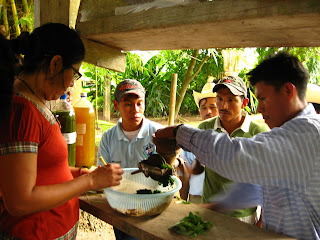 The other group making the insecticide

I love visiting integrated farms because usually the people who run the farms start off just like the farmers that we take to visit. The only difference is that they were willing to try different techniques to improve their farm. This means that the farmers of integrated farms can relate to other Honduran farmers and thus know how to teach them using many visuals and simple metaphors instead of listing off technical vocabulary that are above comprehension. They also know what to say to motivate them to change their farms or are familiar with the excuses and reasons why farmers are reluctant to change their practices. And the best part is that Honduran farmers are teaching Honduran farmers! There may have been some external aid at some point, but now the integrated farm we visited is 100% sustainable. 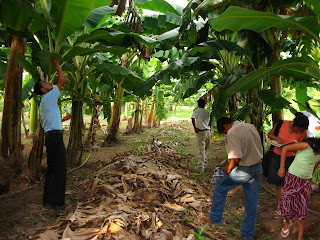 Banana trees with compost in between 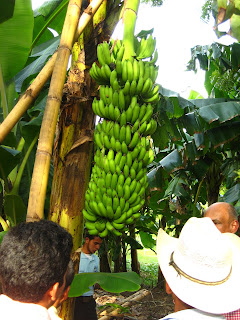 Look at all the bananas they get on one branch! 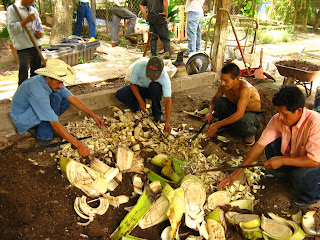 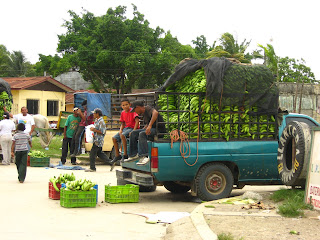 A man selling bananas in El Progreso on the north coast 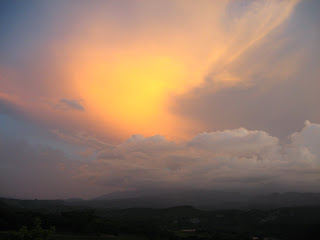 The sunset on the way home
Posted by Courtney at 2:04 PM 2 comments:

With leftover money from the improved stoves project, an organized group of farmers and I were able to finish building a greenhouse in one of the neighborhoods of Nueva Esperanza called Las Olominas. World Vision had initiated this project but was unable to provide everything. They ended up being short approximately 20 bags of cement, two rolls of chicken wire, 1,000 bricks, and so on. All in all, about 15,000 Lempiras. In two trips to Gracias, we were able to purchase the materials they were missing and get them up the mountain. The greenhouse is going to be used by the group of farmers that installed the irrigation system in Nueva Esperanza. Each farmer will get a part of the greenhouse where they will germinate their horticulture seeds. Here is a photo of the greenhouse: 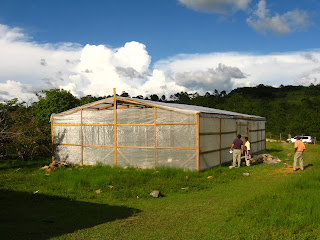 My Project Manager, Menelio, came out to see the greenhouse

Now that there is the irrigation system in Nueva Esperanza, the farmers are learning to grow all different kinds of vegetables they have never grown before. Many institutions have taken interest in their work and are planning on helping them in many different areas (hence the greenhouse). The goal is to sell their vegetables in the markets and in bigger cities. They still have a ways to go, but hopefully they can eventually generate a steady income from their plots of land! 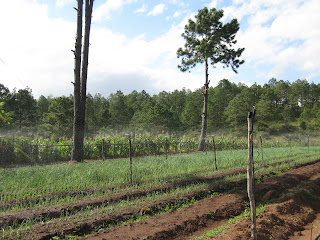 The irrigation system in action 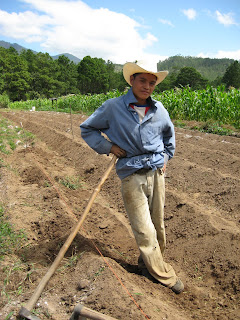 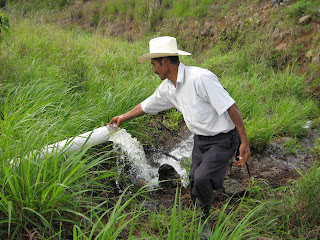 Don Virgilio enjoying the water of the irrigation system 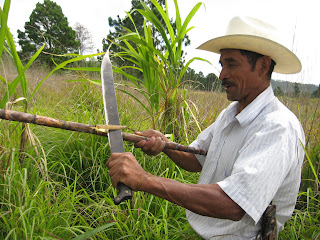 Virgilio peeling me a piece of sugar cane to ¨chupar¨(suck) while touring Otolaca
Posted by Courtney at 1:03 PM No comments: