July 25th marked the anniversary of the Agroforestry Cooperative “San Matias” in La Campa. I have worked a fair amount with the manager of the cooperative who has thoroughly supported the potters with loans, buying/selling their product, and organizing sales at fairs and events. 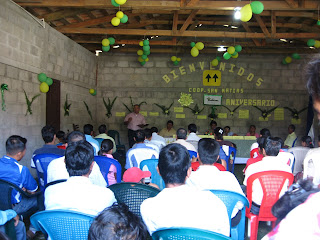 The anniversary was to begin at 8 am and I didn’t arrive more than 2 minutes late when I came up the hill at 9:10 to the large warehouse-style room usually used to store coffee. I finally have Honduran time down! Although I admit I did walk quicker than usual because even though I knew nothing had started at 8, deep down I knew I was getting there . . . well, late. I can’t seem to ever get rid of the thought: “What if on this occasion things actually start on time?” And sometimes people will tell me the time they think something will actually be starting because they know I arrive on the hour. I guess there’s habits we just don’t shake after two years. (July 11th marked exactly two years for me in Honduras!)

By the time I arrived, the number of this anniversary had already fallen from being taped on the wall, so I don’t know exactly which anniversary we were celebrating. We began with singing the National Anthem and then with a devotional from the pastor. The Evangelical church band from my village filled the spaces between every bullet point on the agenda with ranchera tunes. We almost needed them to provide an intermission during the president’s words who, during his 50 minute oration, appeared to begin concluding his speech by thanking everyone for listening to him three different times before thinking of something else he wanted to say and then continuing on. Then, he was so delighted by the applause that followed that, after the music interlude, he stood up and continued again for another ten minutes.

During his speech, more and more people started to show up and so more chairs were brought to squeeze people in. The screeching of chairs and shuffling of people made it hard to hear the president at times. Also, every now and then, the green and yellow balloons that someone had meticulously hung from the ceiling and walls started to pop haphazardly or deflate as they were only tied with string. One strong breeze sent the name plates of the board flying to the ground and the people in the front row gathered them up and put them back in place just to have them blow down again twenty minutes later. Oh well, they weren’t in the correct order in the first place. 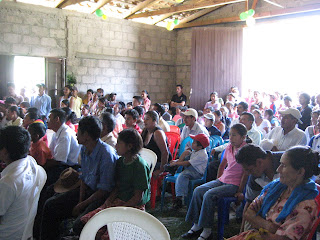 The event ended with lunch for the 150+ people who arrived and I found my friend, Leonor, with her daughter Esmeralda. I was looking for them during the meeting and was sad to see they hadn’t come. They had either entered later and I didn’t see them in the back or they had come just in time for the food, not uncommon. Either way, Esmeralda’s squeals of laughter turned heads and produced smiles as we played in the line for food. All in all, the meeting was . . . a lot of fun! We didn’t play any games or learn anything new that can help us live more productive lives, but I got to chat with tons of people that I hadn’t seen in a while. Sure, I could have been actually DOING something else like cleaning my always dirty house instead of sitting for 3 ½ hours, but two years here has taught me that just getting to see so many people I know and care for is what it’s all really about. A year ago, I probably would have been almost gnashing my teeth with boredom after this. I’m glad I’ve opened my eyes to see that at least some old habits change. 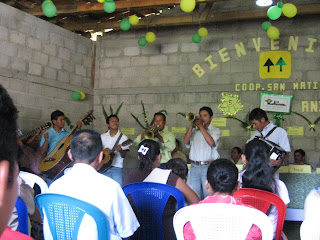 Posted by Courtney at 8:54 AM No comments:

So back in June, Ursula called me one late afternoon to ask if I would like to go to the capital, Tegucigalpa, with a local institution that wanted to take some potters for an art exhibition. It had been a while since I had been to Tegucigalpa and this would give me a chance to check in on how our pottery is doing that is selling in a store over in that area. So, I decided to go. “Great,” Ursula told me, “Well they are gonna be at my house tomorrow at 8 am to leave so can you be there by then?” What?! A little bit more of a warning would have been nice! And maybe if she had told me earlier that, so far, I was the only person that was for sure going! I called my EDUCATODOS students to let them know that English and Math classes were cancelled for the week and then I called Mercedes, the head of our directive, from La Campa to see if she could give a more definite answer about going. There was no way I was going to go alone to sell pottery that wasn’t mine. Where’s the sustainability in that??

Mercedes confirmed that she was going to go and so that morning us and two other women from another community that makes recycled paper out of plant leaves and fibers left with the director of the institution who happens to be a good friend of mine. Going to Tegucigalpa in car is definitely a lot more fun than in bus. We took our time getting there, making random stops at the director’s favorite restaurants and sites. 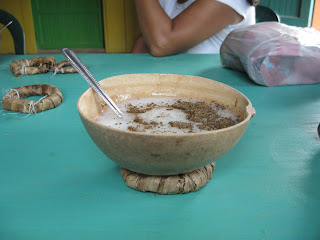 For lunch, he took us to a little traditional restaurant that sells atole (a thick corn drink that can be served as soup) served in guacal (a bowl made of a dried shell excavated from inside the seed of the guacal tree).

Upon arrival to the city, the experience can best be understood by imagining the old movies where the jungle boy is brought to the big city, or the pilgrims have discovered a strange, new world. Even the new car we went in was intimidating! The air conditioning was so cold that it was bothering the womens’ sinuses and the automatic windows prevented them from getting fresh air for about half the trip before I told them how they worked. We won’t even mention the car alarm. On the way, we passed a shop selling tons of pottery and all the women simultaneously cried, “Look! Look! Look!” and pointed out the windows as we passed. Mercedes’ honest face is readable like a newspaper headline and I could tell she was discouraged to see how successful this business was with pottery that was so attractively painted and decorated. Even the director noticed and commented, “Don’t be deceived by their pottery because it doesn’t have the value of years and years of tradition behind the practice.”

In Tegucigalpa, the pilgrims landed, and I, the foreigner, was their guide. We could have just landed in China and the women would have had the same expressions of confusion. One thing that I didn’t expect was how the clothing of the women made them stand out in the city. The raggedly towels on their heads used to protect them from the sun and dust all of a sudden were out of style compared to the suits and high heels of the city folk. I signed us in at the hotel and when I turned around with the keys, I was confused by the commotion that was happening. The three women were huddled around a little table and animatedly doing something. Ah, I saw what it was. Free coffee in the lobby. I suggested we get our bags to the rooms first because how were they going to get everything up the stairs while balancing a hot cup of coffee? But they were worried that the hot pot wouldn´t be there when they returned. ¨Better to take advantage now¨ they told me.

That night, I half awoke to my bed vibrating violently below me. Initially, I thought it was a dream that someone was standing at the side of my bed shaking it and trying to get me to wake up because I was late for the art exhibition. What woke me up completely was when Mercedes starting shouting what was going on and shouting even louder that someone was trying to get in the room. My eyes shot open at that to see the door rattling so hard it was banging against the wall and definitely sounded like someone wanted in really badly. There were footsteps shuffling and distressed voices in the hall as well. The shaking lasted about a minute before everything stopped completely. Turns out, there was a 7.2 earthquake in Honduras at this moment.

The next morning, we went to the Hotel Maya for the exhibition. It turns out it was not an art sale at all! It was a rural bank meeting! This was a meeting of the big shots of this institution to congratulate one another on the success of initiating rural banks (caja rurales) in villages all over Honduras. Of course, publicity is the most important aspect of these events and so cajas rurales had been invited from all over to be in the background as the founders talked to several different newscasts. I guess that’s how we get funding to keep coming. The only times that we got to sell were before and after the meeting when people were trickling in and trickling out. Needless to say, sales weren’t superior. During the meeting, they gave background information on what is a caja rural, how many have now been founded, and the successes of specific caja rurales. The first part of the meeting I paid close attention because it soon became clear to Mercedes and I that we were gonna have to pretend we were a caja rural! Yet another thing that would have been nice to know a little earlier! 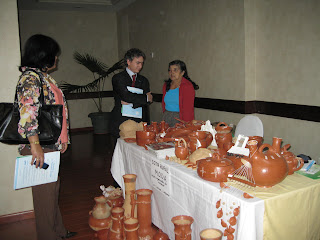 One of the heads of the institution talking with Mercedes

After the meeting was over and we were at our table selling, some of the heads came to ask us about our “caja rural”. Sometimes it’s nice to have the “gringa card” to play. I usually replied, “You should really ask the potter, she will be able to better explain how they work, I just help out where I can in the community. Oh, it looks like I have to go take pictures now. Bye!” Mercedes answer was a little bit smoother, “Well the potters have been organized for quite some time with the help of Corina who has really helped us out a lot to become a caja rural and she can tell you all about the way she has helped.” No one really seemed to notice. 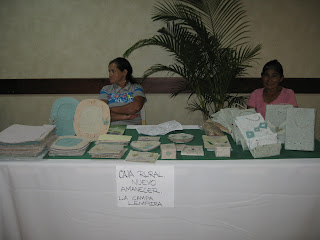 The ladies with their recycled paper

Mercedes and the other two ladies went back that same day in the same car but I decided to stay and head out to Valle de Angeles to see how our pottery was selling. The last time I had been out there was in December with Ursula and Herminia when we left the pottery in the first place. I wanted to visit my fellow PCVs that are out there, too. It was so exciting to actually see our pottery on the shelves! We really were able to break out of La Campa and now more and more people are gonna recognize the red Lencan pottery of the west. Woohoo! I was so excited I even took a picture: 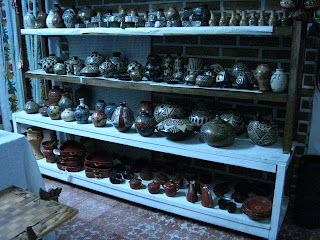